Townsquare Media and the Jay & Linda Grunin Foundation are teaming up to salute our local heroes with our Warrior of the Week program.

Congratulations to Sean Furey, our Warrior of the Week for the week of October 29th, 2018. 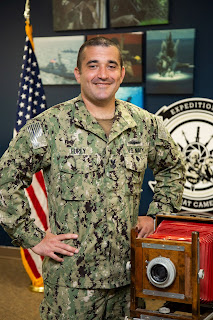 “I flew out with a bunch of sailors with different jobs and we got to work with the Jordanian counterparts,” Furey added. “I also got to do a lot of diving with our explosive ordnance teams and had the opportunity to document civil affair missions. Additionally, I gave out school supplies to local schools for children in need.”

Navy combat photography began its roots during World War I when the Navy organized its first photographic division to capture aerial reconnaissance photographs. During World War II, the Navy added Combat Photographic Units and sent them to the Pacific and European theaters of war to document major campaigns including Normandy and Iwo Jima.

The unit became Expeditionary Combat Camera in 2010 and continued documenting all branches of the military during major U.S. conflicts, operations and exercises.

Furey credits success in the Navy to many of the lessons learned in Normandy Beach.

“I grew up surfing which gave me a basis to be a good swimmer,” Furey said. “This helped me dive and take pictures underwater.”Furey has military ties with family members who have previously served and is honored to carry on the family tradition.

“My grandfather was a Navy quartermaster second class during WWII,” Furey said. “He was on one of the ships during the convey of the biggest submarine attacks against Germany. I also have a great-uncle who served as a pilot in WWII.”

Expeditionary Combat Camera held a disestablishment ceremony Sept. 21 on Naval Station Norfolk. The ceremony honored the history, heritage and legacy of the command. Navy's combat camera units officially disestablish on Oct. 1, 2018, ending 67 years of service to the Navy and Department of Defense.

“All of those who have served at combat camera, have conveyed everything they’ve had to give; creative vision, a drive to excel, and a willingness to sacrifice,” said ECC’s final officer in charge Lt. Michael Larson, during the Norfolk ceremony. “Many have done the best work of their careers here, and that imagery has made a legacy that will live on, and inspires us to carry on.”

As a member of the Navy’s last combat camera unit, Furey and other sailors know they are part of a legacy that will last beyond their lifetimes providing the Navy the nation needs.

“It's a pretty big honor to not only say that I am part of the last crew but I have the privilege of showing my contribution to the Navy through pictures, photo and video,” Furey said. “Some people can only tell stories about their time in the Navy, but I have something tangible to show people.”

Congratulations to Sean Furey, our Warrior of the Week.

Do you know a deserving past or present military member? Nominate them now. Every Military Monday, we’ll share one of the nominations and honor that person as our Warrior of the Week.

Nominate A Warrior of the Week